A lateral move has traditionally been viewed, by hiring professionals, as a negative career strategy. Such a tactic usually raises concerns that the individual wasn’t proactive in his or her career. Perhaps they weren’t competent in their former position and couldn’t get anything “higher”. Regardless of the reality, a lateral move almost always causes specific questions to be asked during the interview process. 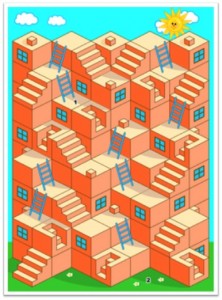 Today, a lateral move may not only be a good idea, it could be a critical step to ensure that you will have a consistent income in your future.

Disruptive innovations have traditionally taken a few years, if not decades, to bring major change to an industry. But technology is changing all that and disruptions can cause businesses to close down over night.

Both Skype and Netflix are often used as examples of disruptions. Skype with its low-cost telecommunications services—pushing the industry (in 2007) toward internet-based technology. How did that affect the long-distance calling industry? Another example is Netflix. Easy access to movies and the, now affordable, ultra-large HD screen TV—and you can have your own home theater. What has this done to movie attendance, what did it do to Blockbuster?

These kinds of disruptions have an obvious impact to the primary industry and they also bring additional changes to the supporting industries that depend on them for their revenue streams. An example in the telecommunications industry might include “Operator assistance”. Have you used that service lately?

As movie attendance has declined, the refreshment industry has taken a hit. That would include the industries that produce the containers for popcorn and soda, the popcorn makers, the delivery of candy and soda. And don’t forget the housekeeping crew and the list goes on and on.

Death to your career.

Really, if the San Andreas fault suddenly slipped—no one would be surprised. You can hear people say, “Well, we knew it wasn’t ‘IF’ but ‘WHEN’ it was going to happen.” Other weather concerns can happen suddenly and ARE a surprise; like tornados, flash floods, and mud slides.

Sudden and unexpected changes that invade the career landscape are like aftershocks following an earthquake. We need to be aware of treacherous curves, forks in the road and for some; the disruption can bring their career path to a complete stop. Then what!

We have to be ready. This is where a lateral move may save you from sudden destruction or at best, a slow death.

The current predictions indicate we will change jobs every three to four years. In the graphic below, the bottom row is where you are currently positioned or where you hope to land a job. The middle row represents possibilities for your next move and the top row represents the move after that. 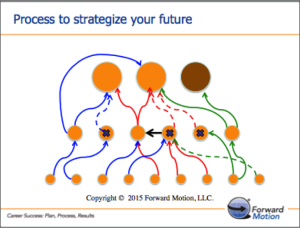 If you are watching your industry carefully, and realize that some of your options are disappearing (like the circles with the blue “x”), then it may be time for a lateral move represented by the black arrow in the middle column. If you watch from the bottom row and see that areas in your career path are no longer available, then it’s time to set your sights on other possibilities.

Notice the large circle in the top row on the right; the one that is darker than the others. As you watch your career path choices, your 6 to 8 year potentials will likely change. That signals another potential lateral move. As these changes become visible, you should reposition yourself for better opportunities with a higher potential for success.

Visiting this model every three months is one way to keep abreast of change in your industry and manage your future.

How to handle a lateral move on your résumé:

Have you ever been to an interview and had to answer the question: “So why did you leave _______?” That’s not a good sign. Now you have no choice but to use up valuable interview time talking about why you left a former place of employment. Wouldn’t you rather spend your time talking about the value you can bring to your potential employer? I hope so.

Explain why you left:
On your résumé, after the name of your previous employer and your role or title, you should briefly indicate why you left. There are a myriad of good, acceptable reasons. Here are a few examples. I’m sure you can spot the two options that explain a lateral move. Once these are on your résumé, you can simply refer to it if the interviewer asks about them.

How to explain your lateral move in an Interview:

If you choose not to include this information on your résumé, then you will likely be asked about your departures during your interview. Be ready! This question comes up when an interviewer sees a short employment entry as well as a lateral move. 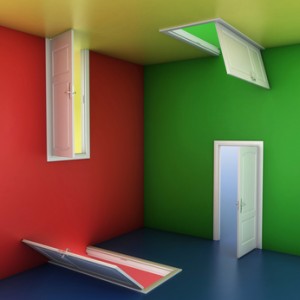 Begin your response with, “Thank you for asking.” Then continue with something like:
Lateral moves are not only important for your future, they may be the very tool that will save you from a bout of unemployment.

I believe we are moving to a-labor-on-demand employment model where everyone will essentially fill the role of consultant or “temporary employee”. As that becomes the norm, you should be ready to manage change in your career path both on paper and during an interview.